This extensive report provides detailed information on the levels of DHA (docosahexaenoic acid) as well as the omega-6 fatty acid in the form of AA (arachidonic acid) arising from 65 studies worldwide on 2474 women. The average concentration of DHA in breast milk from combining all results was 0.32% of total milk fat by weight and 0.47% in the case of AA. The concentrations of DHA in breast milk were highly variable and the highest concentrations were found primarily in coastal populations and were associated with marine food consumption. In contrast, the AA concentrations showed much less variation across the various countries.

The figure below summarizes the levels of DHA in breast milk from 9 of the countries studied as reported in this present paper as derived from a prior analysis by Yuhas et al. (Lipids, 41: 851-858 (2006)). The figure below indicates that the lowest concentrations of DHA were found in North America wherein American and Canadian breast milk levels of DHA averaged only 0.17% of total fatty acids in contrast to the highest levels found in Japan where DHA represented 0.99% of the total milk fatty acids. 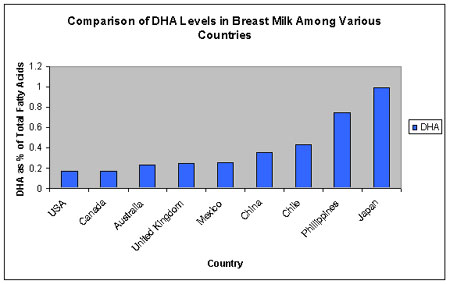 This present report indicates dramatic differences in the DHA levels in breast milk across different countries which reflects the corresponding differences in DHA intakes during lactation (and also pregnancy) in women living in these various countries. We previously reported from our research (Denomme et al., Nutrition, 135: 206-211 (2005)) that the average intake of DHA amongst the Canadian women studied during pregnancy was only 82 mg per day which is consistent with the very low levels reported in breast milk samples from Canada. In direct contrast, the high levels of DHA in breast milk of Japanese women is consistent with the much higher daily intakes of DHA (primarily from regular fish consumption) in Japanese women as compared to North American women who consume fatty fish at an intake frequency of only approximately one serving every 10-12 days.

Return to Other Health Conditions Research