Recent studies have focused on the potential for fish oil supplements enriched with DHA/EPA to modify 'hard' clinical endpoints such as cardiac mortality in patients and at-risk subjects. The 1999 GISSI Prevenzione trial results from Italy indicated a highly beneficial effect of DHA/EPA supplementation in patients who had experienced a myocardial infarction. The overall findings on the effect of fish oil supplementation relative to controls on follow-up are outlined in Figure 1 below. The 11,324 patients who had experienced a myocardial infarction were assigned to supplemental interventions following the introduction of a Mediterranean-type diet (which included moderate fish consumption), as well as aggressive treatment with various pharmaceutical agents for cardiovascular care. Approximately half the patients received omega-3 supplementation providing 850-882 mg/day of DHA plus EPA (combined). Over the follow-up interval of 3.5 years, the individuals who received omega-3 supplementation were found to exhibit an approximate 30% reduction in overall cardiovascular deaths and a reduction in sudden cardiac death of about 45%. 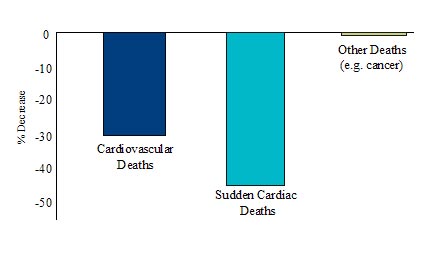 Studer et al. (2005) has recently compiled and published a systematic search of randomized controlled clinical trials on various lipid-lowering interventions. A summary of this search is depicted below in Figure 2. In the 33 trials where statin (cholesterol-lowering) medication was employed, an overall 22 percent reduction in cardiac mortality was realized. Interestingly, a 32% in cardiac mortality was observed overall in the 12 studies employing higher intakes of n-3 PUFA (omega-3 fatty acids). These and other findings have led the American Heart Association to officially recommend one fatty fish meal per day or alternatively omega-3 fatty acid intake as DHA/EPA (combined) of 900 mg/day - an amount shown to beneficially affect coronary heart disease mortality rates in patients with coronary disease. 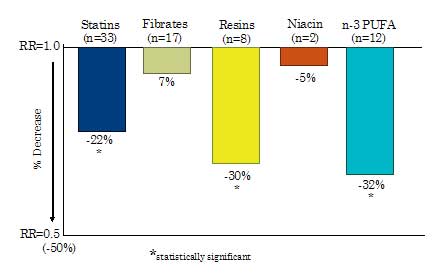