Fatty acid analyses of serum (or plasma) phospholipid, a recognized biomarker for EPA and DHA intakes and overall physiological status, have exhibited an inverse correlation between n-3 PUFA and particularly the DHA levels and the development of CHD in men. Fatty acid compositional data on plasma phospholipids from the Cardiovascular Health Study, drawn two years before a cardiac event, exhibited a 70% lower odds ratio for fatal ischemic heart disease in those with higher blood levels of DHA + EPA. The figure below (Figure 1) indicates from the study of Lemaitre et al. (2003) that those with at least 4.6% plasma phospholipid as DHA + EPA had a 70% lower risk of fatal ischemic heart disease; no relationship to non-fatal myocardial infarctions was observed. A strong inverse relation between the summed blood levels of the long-chain omega-3 PUFA (mainly DHA plus EPA) and the risk of sudden cardiac death has been reported in men without prior evidence of cardiovascular disease by Albert et al. (2002). The laboratory assessment of fatty acids in blood serum (plasma) phospholipid and other circulating components are now being utilized in Canada, the U.S., and other countries as part of an overall CVD risk assessment. 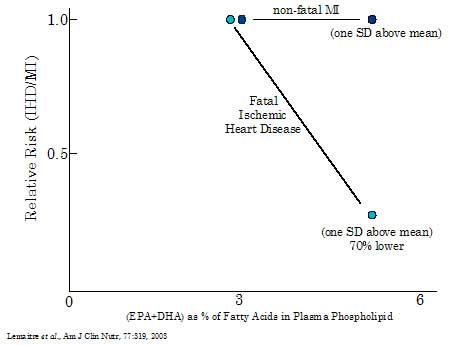 Much of the traditional focus on the modification of circulating lipids/lipoprotein factors for the primary prevention and secondary management of cardiovascular disease (CVD) has emphasized a reduction in total cholesterol levels and LDL-cholesterol levels because of the established relationship between these latter two risk parameters and serious CVD end-points. More recently, evidence has come forth that fasting plasma (serum) triglycerides are important and independent risk factors for coronary heart disease (CHD). For example, a progressive increase in the incidence of major coronary events over an eight year period in men was associated with progressively increased levels of fasting triglyceride levels over eight years of follow-up (see Figure 1). 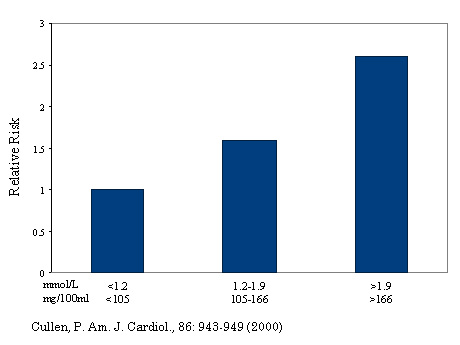 Very recently, a prospective study based on a population with prevalent metabolic syndrome (as seen with increasing occurrence in our societies today) supported plasma triglyceride as an independent predictor of cardiovascular disease (see Figure 2). 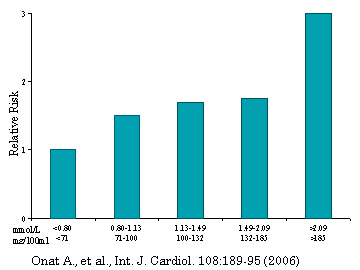 Figure 2: Relationship between serum triglyceride levels and the risk for fatal plus non-fatal CVD (after adjustment for traditional risk factors).

The ability of supplementation with fish oil and derived concentrates containing DHA/EPA omega-3 fatty acids have long been recognized. Appropriate review articles on this topic are available (including the reviews by Harris and Balk et al . as provided below). Figure 3 below gives the average expected percentage reduction in fasting triglyceride levels as determined from the review of various published trials by Harris. The expected reductions for each gram of DHA/EPA (combined) as consumed daily over a period of at least a few weeks (in amounts ranging from 1gm up to 4 gm DHA/EPA daily) are given in relation to the fasting baseline serum (plasma) triglyceride levels in the target populations. It is apparent, that the reductions in fasting triglyceride levels range from 20 and up to approximately 35% for dosages of 3-4 gm of DHA/EPA (combined) per day. 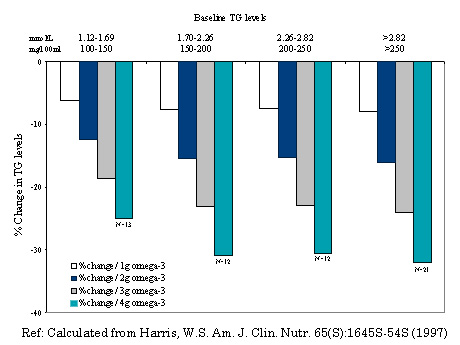 Figure 4 indicates that little or no change (plus or minus 1% overall) in the non-HDL-cholesterol levels is realized per gram of DHA/EPA (omega-3) intake daily based on the various cross-over and parallel studies reviewed by Harris.

Figure 6: Average expected % change in the fasting TG:HDL-cholesterol ratio based on baseline triglyceride status in various cross-over and parallel studies.