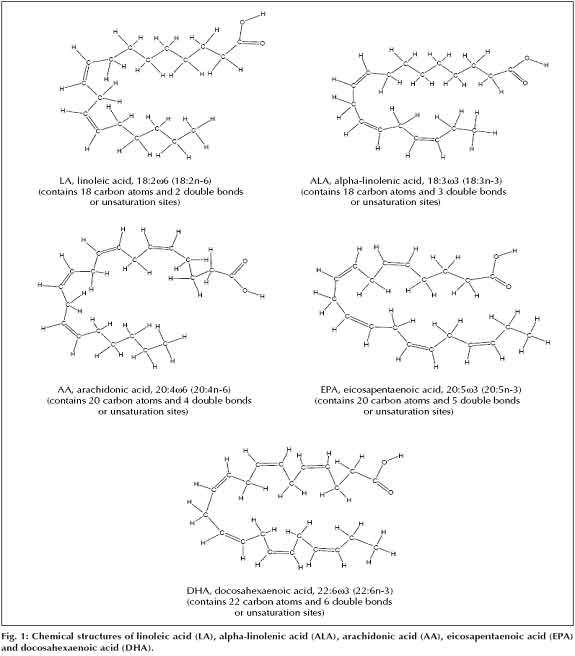 Whereas plant foods and vegetable oils completely lack DHA plus EPA, some do contain varying amounts of the omega-3 (n-3) polyunsaturated fatty acid known as ALA, a-linolenic acid (18:3n-3), abbreviated as ALA or ALA, which has 18 carbon atoms and 3 double bonds as seen in Figure 1. Many vegetable oils (including corn, safflower, sunflower, and soybean oils) are greatly enriched with omega-6 fatty acid known as LA, linoleic acid (18:2n-6) having 18 carbon atoms and 2 double bonds of the omega-6 configuration. A few plant sources (including non-hydrogenated canola oil, ground flaxseed, and walnuts) are rich sources of ALA. The second omega-6 fatty acid known as AA, arachidonic acid (20:4n-6), is consumed in low amounts in a typical diet; as for dietary cholesterol, it is found in animal and not plant food sources. The metabolism of LA in the body gives rise to significant amounts of AA. A fourth omega-3 fatty acid known as DPA, docosapentaenoic acid (22:5n-3), is a very minor constituent of the North American diet but a significant component of marine mammals, particularly seal oil where it represents approximately 5% of the total fatty acids present.

It is noteworthy that polyunsaturated fatty acids have highly curved structures as depicted for the various polyunsaturated fatty acids in Figure 1. These curved structures are due to the presence of the many natural double bonds (of the 'cis' configuration) which bring about a folding over of the fatty acid structures. Furthermore, the presence of multiple double bonds results in a lowering of the melting point of these fatty acid structures such that all of them are highly fluid and in liquid form at a room temperature of 23ºC and even more so at internal human body temperatures of 37ºC.