Metabolism of Omega-6 and Omega-3 Fatty Acids and the Omega-6:Omega-3 Ratio

Figure 1 gives an overview of the metabolic fate of the EFAs when consumed in the diet. The n-6 and n-3 PUFAs when consumed in the form of dietary triglyceride from various food sources undergoes digestion in the small intestine which allows for absorption, transport in the blood, and subsequent assimilation within tissues themselves through the body (including brain, retina, heart, and other tissues). As depicted in Figure 1, the EFAs can undergo cellular beta oxidation to provide cellular energy in the form of ATP as for the more common and prevalent saturated, monounsaturated fatty acids (MUFAs) and any trans fatty acids that might be present in the diet. EFAs can also undergo esterification into cellular lipids including triglyceride, cholesterol ester, and phospholipid. The essential fatty acids which are assimilated into triglyceride forms are often stored therein until required later for subsequent metabolism and functioning. As such, the EFAs will be released from the stored triglyceride forms by enzymatic/hydrolytic processes. EFAs can also be temporarily stored as esterified fatty acids to a cholesterol backbone (as cholesterol ester); the EFAs can subsequently be released from the cholesterol ester forms and utilized for subsequent metabolism as well. The EFAs which are assimilated into phospholipid are particularly important in the overall structure-function of both omega-6 and omega-3 fatty acids since these membrane forms (as phospholipids) maintain both the structural integrity and the critical functioning of cellular membranes throughout the body. Finally, and very importantly, the dietary EFAs present as linoleic acid (LA) and as alpha-linolenic acid (ALA) are activated to high-energy forms known as fatty-acyl CoA which provides for the conversion of these dietary PUFAs into their important longer-chain and more polyunsaturated products as derived by a series of desaturation plus elongation reactions which are particularly active in the liver and to a lesser extent in other tissues. 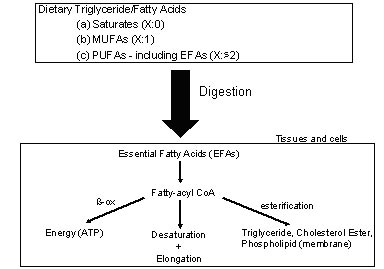 As seen in the Table 1, the saturated fatty acids (e.g., 18:0, a saturated fatty acid of 18 carbons in chain length with no double bonds) can be readily synthesized in the body from the two carbon unit known as acetate (acetyl-CoA in its active cellular form). In addition, saturated fatty acids are derived from dietary sources and can be metabolized by desaturation reactions (insertion of a double bond enzymatically) to convert it into a monounsaturated fatty acid (18:1 with one double bond in the molecule which is designated as an n-9 since the double bond is adjacent to the 9 th carbon counting from the methyl end). It is noteworthy in Table 1 that LA and ALA in the body can only be derived by dietary sources since the human body totally lacks the enzymatic capacity to synthesize these two EFAs. In contrast, plant cells do have the enzymatic machinery to synthesize LA and ALA such that many plants and derived vegetable oils are abundant sources of both LA and ALA. AA (20:4n-6) is found in small amounts in animal food sources (e.g., eggs and meats) and can also be formed by desaturation plus elongation reactions from its precursor, LA. The long-chain omega-3 fatty acids, DHA and EPA, can be formed to some degree in the human body, albeit to very limited extents as will be discussed later, and can be consumed preformed in the diet from sources rich in DHA/EPA such as fish/fish oils or functional foods which have been enriched or fortified with these important omega-3 fatty acids. Figure 2 shows the metabolic steps (desaturation plus elongation reactions) by which LA is metabolized to AA and by which ALA is metabolically converted to the long chain products including EPA and DHA, the physiologically-essential omega-3 fatty acid for brain and visual functioning. 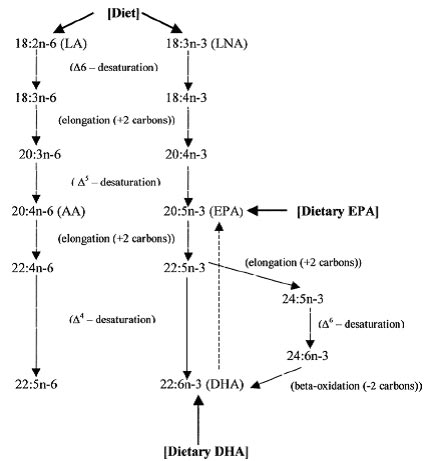 It is noted in the Figure 2 that elevations of DHA plus EPA in the human body (tissues and cells) can be readily provided for by the direct dietary consumption of DHA and EPA. Unlike LA which is present at considerable levels in most cellular lipids (particularly membrane phospholipids) throughout various tissues and cells, ALA does not usually accumulate to particularly high concentrations in cellular/tissue lipids/phospholipids even when ingested at relatively high dietary levels. This is partly due to the fact that much of the ALA which is consumed in the diet undergoes beta oxidation in the mitochondria and only a limited amount is available for the very limited conversion of ALA to EPA plus DHA. Figure 2 also indicates that dietary DHA has the potential to undergo some reverse metabolism (retroconversion) back to EPA as indicated by the dotted line in the figure.

Some commentary on the so-called omega-6:omega-3 ratio which is readily referred to in the popular press and in the marketing of various nutritional supplements needs to be briefly addressed herein. The omega-6:omega-3 concept originates primarily in the early rodent experiments where high levels of LA (omega-6) in the diet were found to partially suppress the conversion efficiency of dietary ALA to EPA plus DHA in the body. As indicated in the previous figure, LA and ALA are metabolized to their corresponding products via common enzyme systems (including initial delta-6 desaturation). Early animal studies that used excessively high levels of dietary LA (n-6) relative to ALA (n-3), giving rise to very high omega-6:omega-3 ratios, resulted in a smaller rise in DHA/EPA levels in tissues due to the competitive inhibitory effect of LA and ALA at the level of the initial desaturation reaction. Thus, lower ratios of omega-6:omega-3 were found to provide for a somewhat better conversion efficiency of ALA to DHA/EPA as compared to higher omega-6:omega-3 ratios even when the amount of ALA was fixed at the same amount. These animal experiments have influenced subsequent dietary recommendations, such as those from Health and Welfare Canada in 1990 where they recommended that attempts should be made to reduce the omega-6:omega-3 ratio in the Canadian diet to approximately 10:1 down to 4:1. Subsequent human studies have indicated that lowering the LA(n-6):ALA(n-3) from higher levels (e.g., 27:1 down to 3:1) does allow for a somewhat moderately enhanced conversion of dietary ALA to EPA as revealed by moderately higher levels of EPA in blood samples taken from subjects given varying n-6:n-3 ratios and amounts of ALA. Thus, higher intakes of ALA and much lower ratios of LA: ALA is one strategy for moderately enhancing the conversion of ALA to EPA via the desaturation/elongation reactions presented in Figure 2. However, it is most interesting to note that numerous human studies which have lowered the n-6:n-3 ratio (as LA: ALA ) have not shown a significant rise in DHA with the lower ratios or even with higher intakes of ALA despite the moderate rise in EPA as mentioned previously. Furthermore, it is becoming apparent that the direct consumption of pre-formed DHA and EPA provides for a highly efficient elevation of these important long-chain omega-3 fatty acids in cells and tissues such that dependency on lower LA:ALA ratios becomes questionable since enrichment of the body in DHA plus EPA is then not dependent on the desaturation/elongation reactions for such enrichments. In conclusion, the omega-6:omega-3 concept, based on animal studies focusing upon LA: ALA ratios alone, needs to be reconsidered in the context of dietary/health situations where DHA plus EPA are consumed directly in their preformed state.

The omega-6 product formed from the desaturation plus elongation of LA is arachidonic acid (AA, 20:4n-6) which accumulates to very high concentrations in a wide variety of human tissues and cells. While small levels of AA in the body do have some important functions, such as in reproduction and other processes, excessively high levels of AA are considered to be potentially problematic in the development and/or progression of some chronic health conditions.

As is depicted in Figure 3, AA can be metabolized by various oxygenase enzymes (including cyclo-oxygenase and lipoxygenase systems) to form a family of varying products known as eicosanoids, prostaglandins, leukotrines and thromboxanes. 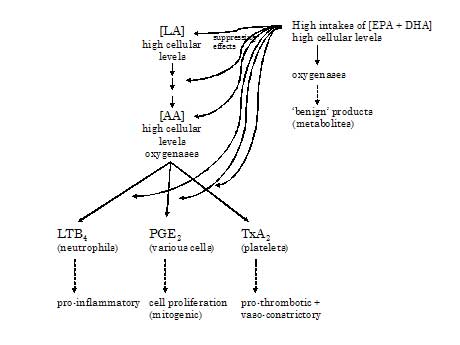 AA can be converted into neutrophils (white blood cells) to form leukotriene-B 4 (LTB 4 ) which is considered to be a pro-inflammatory eicosanoid associated with chronic conditions such as rheumatoid arthritis, psoriasis of the skin, and inflammatory gastrointestinal disorders. In certain cells and tissues, AA is converted into the prostaglandin form known as prostaglandin-E 2 (PGE 2) which has been associated with enhanced cell proliferation, mitogenesis, and possibly cancer promotion. In circulating blood platelets, AA is converted to thromboxine-A 2 (TXA 2) which is known as a pro-thrombotic and vaso-constrictory eicosanoid which is though to play an important role in thrombus formation and associated with fatal or non-fatal myocardial infarctions (heart attacks). High intakes of EPA plus DHA in the diet, such as from fish/fish oils, allow for the partial replacement (reduction) of AA in the aforementioned cellular systems thereby reducing the amount of AA available to form the metabolites that have been associated with various chronic disorders as mentioned. Furthermore EPA plus DHA, when present as replacement PUFAs for AA in cell membranes, can also inhibit the conversion efficiency of AA to LTB 4, PGE 2, and TXA 2, respectively. Finally, the enzyme-generated (via oxygenase activity) products of EPA plus DHA do not appear to have the potentially harmful effects in contrast to those products formed from AA via the same enzymatic pathways.