DHA (docosahexaenoic acid, 22:6n-3) is now recognized as a physiologically-essential nutrient in the brain and retina (of the eye) where it is required in high concentrations for providing optimal mental performance (neuronal functioning) and visual acuity, respectively. DHA is considered to exhibit its important functioning at the level of cell membranes where it is incorporated into the membrane phospholipid components to mediate its special structure-function effects. 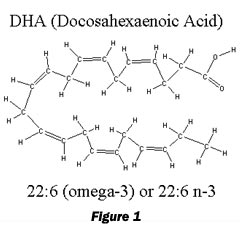 Figure 1 gives the unique structure of DHA where the six natural double bonds of the so-called 'cis' configuration provide for the folding over of the fatty acid structure as depicted in the figure. This unique structure and the very low melting point for DHA of approximately -50 ºC underlies its unique physical-chemical properties including the maintenance of a highly fluid microenvironment within the phospholipid components of grey matter in mammalian brains and in other cell membranes of the nervous system. DHA is known to significantly alter many basic properties of cell membranes including their 'fluidity', elastic compressibility, permeability, and interactions with key regulatory proteins. These various properties and mechanisms of action of DHA in the nervous system including its modulatory effect on the activity ion channels are thought to underlie its role in supporting electrical signaling and ultimately brain functioning such as learning ability, memory, etc. The high levels of DHA in the brain and nervous system are actively deposited particularly during the last trimester of pregnancy and during the first two months of infancy and very early years of a child's life. A source of DHA to brain and nervous tissues is needed to replenish and maintain optimal DHA levels for functioning throughout the lifespan. It is noteworthy that in direct contrast to DHA, EPA is found in near trace amounts in the brain as is ALA regardless of the amount of ALA consumed in the diet. There is some evidence that EPA, while not a significant structural component of brain tissue, may contribute to brain functioning in health and disease by effects such as increasing blood flow and influencing hormones and the immune system which can have overall effects on brain function.

As depicted in Figure 2, dietary ALA (refered to as a-LNA below) undergoes extensive beta oxidation as an energy source with the release of carbon dioxide plus water and ATP in the liver and other tissues and is metabolically converted (via desaturation/elongation reactions) to a very limited extent to DHA. Thus, the direct dietary consumption of DHA is the most direct way of providing DHA for uptake and functioning by the brain and retina. 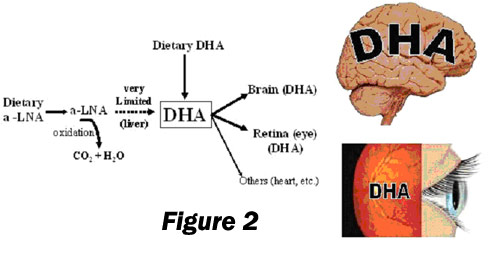 The highest body concentrations of DHA per unit tissue weight are found in the membrane phospholipid components of the photoreceptor outer segments of the retina. The unique biophysical and biochemical properties of DHA, including its imparting 'fluidity' to retinal membranes, render it an essential structural component thereby mediating a faster response to stimulation. The optimal functioning of rhodobsin, the photopigment necessary for initiating visual sensation, is considered to be supported by the presence of DHA in the retinal membranes.

The depletion of DHA levels to sub-optimal concentrations in the brain due to insufficient dietary intakes of omega-3 fatty acids has been found to result in cognitive deficits (impaired learning ability). DHA omega-3 deficiency is associated with both structural and functional abnormalities in the visual systems and the resulting visual deficits have been related in part to a decreased efficiency of key visual signaling pathways due to the deprivation of DHA. A sufficient supply and accumulation of DHA appears necessary for optimal neurotransmission to support cognitive function in the brain and optimal visual transduction and functioning.