Conversion Efficiency of ALA to DHA in Humans

A discussion of the metabolic pathway by which dietary ALA can be converted by a series of sequential desaturation (D) and elongation (E) reactions into EPA and then DHA in the mammalian liver was provided in the metabolism of omega-3 and omega-3 section. This multi-step sequence is briefly outlined below: 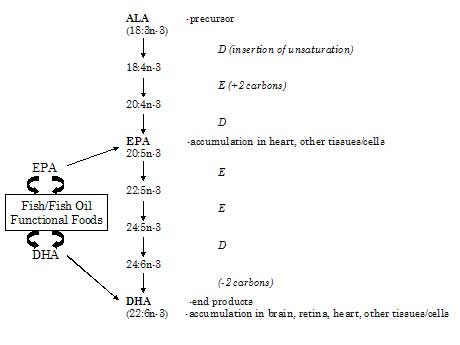 The pioneering rodent studies, reported by Lamptey and Walker in 1976 and subsequently supported in numerous subsequent experimental studies, showed that omega-3 deprivation impaired the learning ability of young animals and that rats could convert ALA into DHA for assimilation into brain tissue (membrane phospholipid components). These rodent-based studies had a significant influence on official recommendations from Health and Welfare Canada (1990) and the Food and Nutrition Board (2002) wherein dietary ALA and not DHA, the brain/retina omega-3 fatty acid for structure-functioning, was recognized as the only essential dietary fatty acid. Official recommended minimal intakes were established for ALA for all members of the population (young and old alike). However, extensive controlled studies in human subjects have now all consistently confirmed the very limited metabolic conversion of dietary ALA into DHA, the final end product of the sequential pathway.

A common approach for assessing the apparent conversion efficiency of dietary ALA to the longer-chain products (EPA plus DHA) in controlled human trials is to determine the net mass rise in circulating (blood) levels of EPA and DHA after increasing the dietary intake of ALA from food sources. The early studies in 1993 conducted at the University of Manitoba in collaboration with the University of Guelph in Canada involved 42-day phases of feeding controlled diets with markedly different levels of omega-3 fatty acid as ALA (alpha-linolenic acid) along with varying amounts of omega-6 fatty acid as LA (linoleic acid) and varying omega-6:omega-3 ratios. While some moderate net rise in the level of EPA (eicosapentaenoic acid) was found with higher levels of ALA in conjunction with omega-6:omega-3 ratios lowered to 3:1; no net rise in the level of circulating DHA was found across the various fatty acid mixtures and ratios. This early evidence for a very limited conversion of dietary ALA into DHA has been supported subsequently by other controlled studies in humans using mass measurements. For example, the feeding of 10.7 grams (10,700 mg) of ALA from flaxseed oil over a four week period failed to provide any significant net rise in the low levels of DHA present in the breast milk of lactating women. It is noteworthy that the levels of ALA supplementation used in the latter study from the Oregon Health and Science University (by Francois et al.) was approximately seven-fold that recommended for pregnant recommended by Health and Welfare Canada (1990) and by the Food and Nutrition Board (2002) during pregnancy.