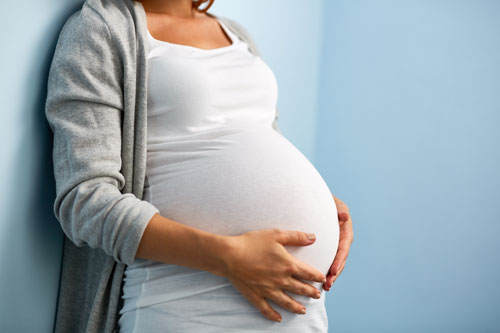 The primary rationale for supplying sufficient intakes of long-chain omega-3 fatty acids for mothers is to support the optimal health of the baby during pregnancy (neonatal period), after birth (during infancy), and during the subsequent childhood period as well as providing for the health and physiological needs of the mother. DHA, with its unique structure, physico-chemical properties, and prevalence in neuronal cell membranes (brain, nerve), plays a key role as a physiologically-essential nutrient for optimal brain functioning of the infant (cognitive performance) and retinal performance (optimal visual acuity). A significant supply of DHA to the developing infant is generally considered advisable throughout pregnancy and particularly during the last trimester. Since ALA (found in certain plant foods such as flax, canola oil, walnuts) is very poorly converted via metabolism to DHA, the most direct and efficient means of supplying DHA to the mother for transfer to the developing baby during pregnancy is via DHA consumption. However, DHA as found predominantly in fish/seafood, is consumed only once or so every 10 days during pregnancy because of concerns with respect to contaminants (eg, methyl-mercury in a few fish which can increase the risk of impaired brain development in the infant), taste, convenience, etc.

DHA intakes average only 80 mg/day in pregnant women based on a Canadian study. The published paper(s) from the 1999 NIH Workshop in Bethesda advised that pregnant women should attempt to consume at least 300 mgs DHA/day. The Food and Drug Administration (U.S.) has recommended that women who are pregnant eliminate shark, swordfish, king mackerel, and golden snapper from their diets while limiting their consumption of other fish to 3 servings/week to minimize exposure to methyl mercury. A recent Canadian study indicated that the consumption of two-three servings weekly of farmed salmon, wild salmon, or rainbow trout, which would provide a daily averaged DHA intake of at least 300 mg/day during pregnancy, would not approach the tolerance levels for mercury, polychlorinated biphenyls, or dioxins and furans as set by Health Canada, the NRC (U.S.), or the World Health Organization. The absence or extremely low levels of environmental contaminants in the DHA-enriched ingredients being introduced into functional foods is another reason for their acceptance by expectant mothers.

There is evidence from published clinical trials that women with higher DHA intakes (via 4 fish servings/week) or by way of supplementation during pregnancy, ranging up to 1100 mg DHA (plus 800 mg EPA) daily, gave birth to infants with higher cognitive development scores and young children with higher IQ scores and mental processing scores up to 4 years of age. A quantitative positive relationship between increasing intakes of DHA (per 100 mg/day) during pregnancy and the child's IQ has been determined. There is also published evidence that mothers with higher intakes of DHA during pregnancy along with higher corresponding levels in their body give birth to infants with improved sleep patterns. Furthermore, fish oil (with DHA + EPA) supplementation during pregnancy may enhance infant immunity (better allergy protection) and reduce to risk of allergic disease. In addition, higher intakes of DHA + EPA during pregnancy (levels as low as 150 mg/day) have been implicated with increased birth weights, moderately prolonged gestation, and reduced risk of preterm delivery. Finally, a higher dietary intake of DHA during pregnancy to support brain development of the baby in the womb has been associated with a great availability to the mother herself and a lesser risk of postpartum depression.