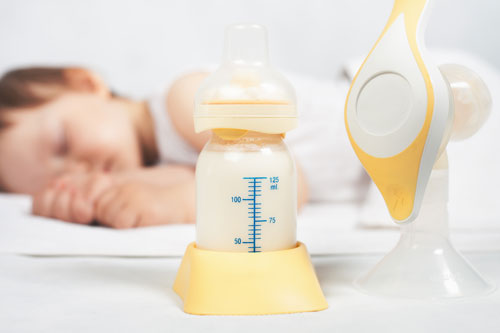 For breast-fed infants, their only source of nutrition (incl. DHA) for growth and development is their mother's milk. The amount of DHA in the diet is a major factor determining how much DHA appears in breast milk for the baby to consume for health. Since fish is by far the predominant food source of dietary DHA, and since fish is consumed at a very low rate (approximately one serving every 10 days), the level of DHA in North American breast milk is very low. For example, Health Canada has reported that DHA represents an average of only 0.14% of the total fat in breast milk. This low level reflects the low dietary intake of DHA during lactation of approximately only 80 mg/day.

It is noteworthy that ALA, alpha-linolenic acid (18:3n-3), a commonly consumed omega-3 fatty acid from plant sources (such as canola oil, walnuts, flax, etc) at approximately 1300 mg/day in a North American diet, is very poorly converted to DHA in the human body via metabolism. For example, the low level of DHA in the breast milk of American women was found to be unaltered despite their consumption of 11,000 mg ALA/day over a 4 week period. Thus, the total omega-3 fatty acid intake alone fails to predict the level of DHA in breast milk. The direct consumption of DHA, at relatively low levels, provides a fairly rapid and marked improvement in the DHA level found in breast milk. An intake of 300 mg DHA/day during lactation has been found to elevate breast milk levels to 0.39% of total fatty acids, a level which slightly surpasses the levels of DHA (0.35%) present in infant formula studies in infants which have resulted in better mental and visual functioning. Supplementation of breast-feeding women with 200 mg DHA/day for four months after delivery resulted in higher circulating levels of DHA in their blood plasma phospholipid and higher scores on the Bayley Psychomotor Development Index at 30 months of age. Positive relationships have also been reported for high levels of DHA in mothers' milk and visual development in term infants as well as optimized arousal in newborn infants. A Norwegian study indicated that women who supplemented their diet with 1183 mg DHA and 803 mg EPA per day for a 3 month period after delivery, after supplementing at a similar level from week 18 of pregnancy, gave rise to young children at four years of age who exhibited more favourable mental development based on the augmentation of their IQ assessments. Correlational studies have also indicated that infants from mothers who maintained supplementation with fish oil (DHA + EPA) during lactation exhibited a better visual acuity at 4 months of age when higher levels of the long-chain omega-3 fatty acids were found in their red blood cells as compared to those with lower levels of in their red blood cells due to lower dietary intakes of DHA plus EPA by their mothers during lactation.